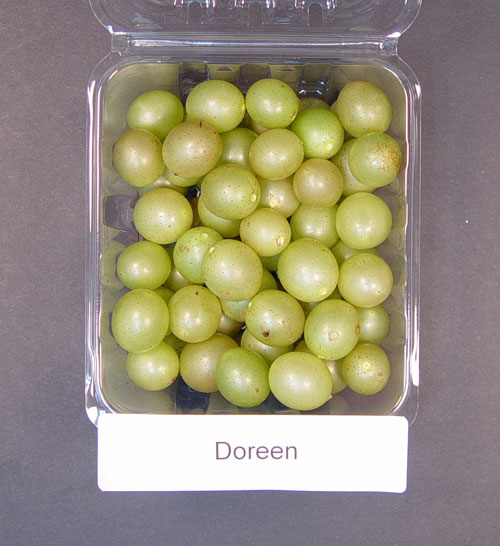 'Doreen' was released by W. Nesbitt, D. Carroll of North Carolina State Univ. and J. Overcash, C. Hedgwood, and B. Stojanovic of Mississippi State University in 1982. It was released because it was capable of making wine equal to that of 'Carlos' and has greater disease resistance.

In general, 'Doreen' performed well in our trials. I believe it may have some use as a bronze juice grape. In comparison to 'Carlos', 'Doreen' has much better disease resistance, similar berry quality, with a much later (September in the south, October in the north) harvest and a less dry scar. I believe it is worth trialing by growers who desire something similar to 'Carlos' with better fruit rot resistance. Since we don't have actual yield data, I would only recommend a small planting until a grower can assess 'Doreen's' performance in their vineyard.