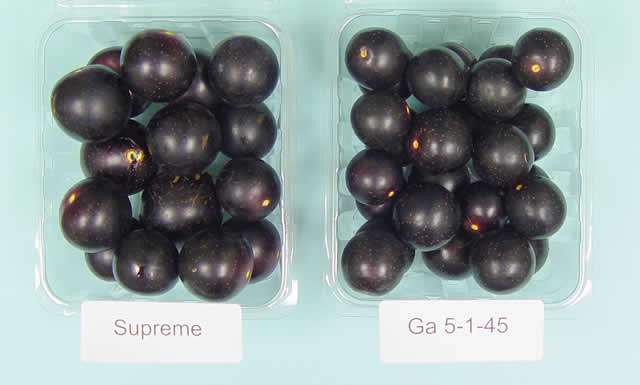 Vines of Lane are self-fertile and have moderate vine vigor. Total yields from Lane at Tifton were lower than highly productive cultivars like Triumph and Supreme, but higher than most female cultivars like Fry in years 3 through 5. In general yields appear on the low end of what most self-fertile cultivars display, but better than most female cultivars.  Lane berries have a tendency to split and tear during picking, but flesh firmness limits juice leakage after tearing.  Levels of split and tear were similar to Fry and greater than Tara and Hall which have excellent dry pedicel scars.  Growers may wish to reduce irrigation during harvest and delay picking until the afternoon to reduce berry split.

Average first harvest of Lane was August 4, which was similar to the early check cultivars (Tara and Triumph), and two weeks prior to the first harvest of the main season check cultivars, Fry and Supreme. Previously growers have had no options for an early-season self-fertile black muscadine.  Lane will allow growers to have a black muscadine as early as the earliest bronze muscadines so that both colors will be available for the early season market.

At maturity, the berries of Lane are round and average 9 grams in weight and 1 inch in diameter. Berry size is slightly smaller than the other self-fertile cultivars, and significantly smaller than the female cultivars Fry and Supreme.  Lane berry flesh is noticeably more firm than most other muscadines, and the skin adheres to the flesh, providing a unique berry texture.  Due to the high firmness of the flesh, Lane berries hold well on the vine allowing growers to delay picking if necessary.  Lane berries have a sweet and mild muscadine flavor and average 15.5% soluble solids over all harvests.  The color of ripe Lane berries is a uniform black with no redness around the pedicel scar.

Symptoms of Pierce’s disease have not been observed on Lane at any location.  Under a typical fungicide schedule, very low levels of infection of various fruit rots was demonstrated.  Infection levels were similar to Supreme and much better than the bronze cultivars tested.  Angular leaf spot was observed during the late season at levels similar to the other cultivars tested.

Lane is recommended as an early season black muscadine for the fresh market.  Although Lane berries are smaller than Supreme, berry size is similar to other successful fresh market cultivars.  Appearance of Lane in clamshells is excellent due to a consistent berry size and very dark, evenly colored berries.  Due to its lower yields, Lane is only recommended for the early market, before other black muscadines become available.  Currently, growers in south Georgia enter the early market by picking the very first berries to ripen on Supreme.  This requires multiple harvests of Supreme resulting in high labor costs.  Lane ripens relatively uniformly and can be harvested with two pickings at the beginning of the season.  Growers can then move into Supreme as the main season cultivar when a greater percentage of its berries are ripe.  The similar flesh quality between Lane and Supreme should facilitate their use in the same market.  Lane needs to be trialed more thoroughly in northern muscadine production regions before large plantings are made in these locations.  The author may be contacted (pconner@uga.edu) for a list of nurseries licensed to sell Lane muscadine.