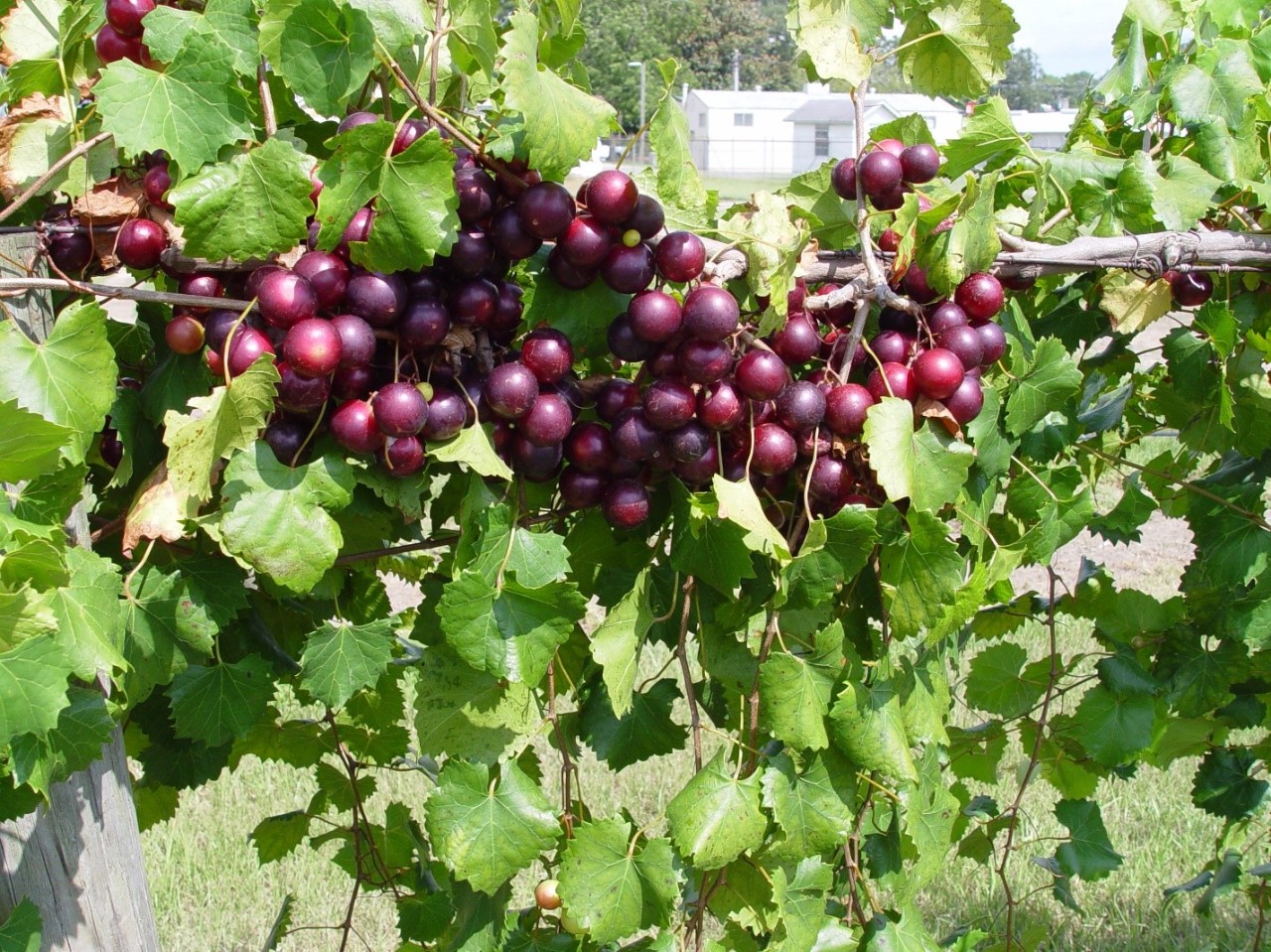 RubyCrisp™ berries on the vine.

‘RubyCrisp’ was released by the UGA muscadine breeding program in 2019.  ‘RubyCrisp’ originated in Tifton, GA, from a cross of ‘Supreme’ by ‘Tara’ that was made in 2008. ‘Supreme’ is a female cultivar that produces black berries with exceptional size and firmness. ‘Tara’ is hermaphroditic and produces bronze berries with dry pedicel scars that ripen early in the muscadine harvest season. The original ‘RubyCrisp’ vine first fruited in 2010. The vine was selected in 2011 for its large berry size, hermaphroditic flowers, and excellent flavor and it was propagated for further trials as Ga. 8-1-338.

‘RubyCrisp’ vines are self-fertile and do not need a pollinizer.  Total yields of ‘RubyCrisp’ were excellent and consistently ranked among the highest yielding cultivars in all years of the trial (Table 1).  Usable yield was reduced by both rot and pedicel scar split, but usable yield remained among the highest of the tested cultivars.  Berry rot in ‘RubyCrisp’ appears higher than typical black cultivars but lower than bronze-colored cultivars (Table 1).  Percentage pedicel scar split was higher than the recent commercial cultivar releases Hall and Paulk.  Overall percentage of dry scar was lower than ‘Hall’, ‘Paulk’, and ‘Supreme’ (Table 1).  Berry firmness was similar to ‘Paulk’, less than ‘Supreme’ and more than ‘Fry’ at harvest (Table 2).  However, after 11 d of storage berry firmness was less than both ‘Paulk’ and ‘Supreme’ and similar to ‘Fry’.  The ability to pick berries with a dry scar and firmness in storage are vital traits for a commercial packing berry, and the low percentage of dry scar and softening during storage of ‘RubyCrisp’ make it unfavorable for this use.

Average first harvest of ‘RubyCrisp’ was 21 Aug. (Table 1), which was similar to the midseason check cultivars Supreme, Fry, and Paulk.  Normal harvest seasons extended into the first week of September.  Berry size of ‘RubyCrisp’ was similar to ‘Supreme’ and ‘Paulk’, and larger than the other check cultivars (Table 1).  Percent soluble solids was higher than all other cultivars except ‘Lane’ (Table 1) and flavor was sweet with relatively low muscadine aroma. The firm flesh and tender skin of ‘RubyCrisp’ make it distinctly different from the other tested muscadine cultivars and more similar to texture of V. vinifera table grape cultivars.  In addition, ‘RubyCrisp’ berries are non-slipskin and the berry skins have a neutral flavor, favoring the flesh and skins to be eaten together.  ‘RubyCrisp’ berries are attractive with a distinctive red color (Figs. 1, 2) and have a good flavor.

‘RubyCrisp’ combines several rare traits for a muscadine cultivar which have led it to be a popular selection at field days and grower events.  The red coloration of the berries is very distinguishing and pleasing to most consumers.  In addition, the tender skins and crisp flesh of ‘RubyCrisp’ is similar to a V. vinifera fresh-market grape and adds to the originality of this cultivar.  Berries show good sweetness, but muscadine aroma and flavor is low.  This is pleasing to some people who dislike muscadine flavor, but unfavorable to others that do like the characteristic flavor of a traditional muscadine.  Unfortunately, the tender skin of ‘RubyCrisp’ berries make it difficult to commercially pick without suffering relatively large losses due to berry split.  Heavy rainfall during harvest season can also lead to fruit cracking.  However, the unique fruit quality traits of ‘RubyCrisp’ warrant its release as a home-garden and pick-your-own cultivar.  Given the large berry size and high production potential of ‘RubyCrisp’, growers may need to limit vine fruitfulness, especially on young vines, by increasing the distance between fruiting spurs or thinning the crop so that the vine is not weakened by maturing excessive crops.  Limited data is available to determine the cold hardiness of ‘RubyCrisp’ vines, and large plantings should not be made in the northern muscadine regions until more data is available. ‘RubyCrisp’ has been licensed to Ison’s Nursery and Bottom’s Nursery.

Yield, flower and fruit attributes of ‘RubyCrisp’ and standard muscadine cultivars in Tifton, GA in the third through fifth years of growth (2014-2016).